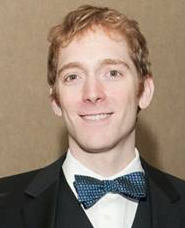 Sam Henly is a graduate student from Minnesota. His favorite color is red, and his spirit animal is a black and white cat named Penelope. Sam enjoys game theory, doing the dishes, and reciting fake poems. Is that even possible? Maybe he just enjoys extemporaneous doggerel.

What do you think of Outdoor Trek so far, and what are you looking forward to about the upcoming production?
Outdoor Trek is the best thing that's ever happened to me. Acting in an Outdoor Trek production taught me how to love again. That accomplished, I'm looking forward to playing a thug and menacing the audience during one of Kirk's monologues. Many villains in Star Trek are at least composed or dignified and so playing a malevolent, unhinged mook is a particular treat.

What cool things do you do in your life outside of Outdoor Trek?
I'm writing a thesis on the economics of sex work. That's... pretty much my life. Grad school: major downer. Parents, tell your children.

What history do you have with theatrical productions?
Before playing Spock's love interest in Outdoor Trek's second season I had not acted on stage since Holy Family Elementary School's sixth grade Christmas pageant in 1996.  I played Joseph, had a huge crush on Mary, and nearly died when she put makeup on my face in the coat room before the show.

What history do you have with Star Trek?
After my childhood city was utterly destroyed I lived in my grandparents' basement for several months, and watched The Next Generation on syndication. Episodes at 9pm and 10pm every weeknight! This was the high point of my day, the low point being turning the teevee off after the second episode and trying to sleep in a haunted, witch-ridden basement.

What excites you about the future of mankind?
We can't really lose right? Either we get a lush Star Trek-esque utopia, or a post-apocalyptic hellscape, or a cyberpunk distopia. Sure I would prefer to live in the first, but you have to admit there are some great stories in the latter outcomes as well. Also! The Litter Robot II, if you have a cat and way too much money check it out!
crew report