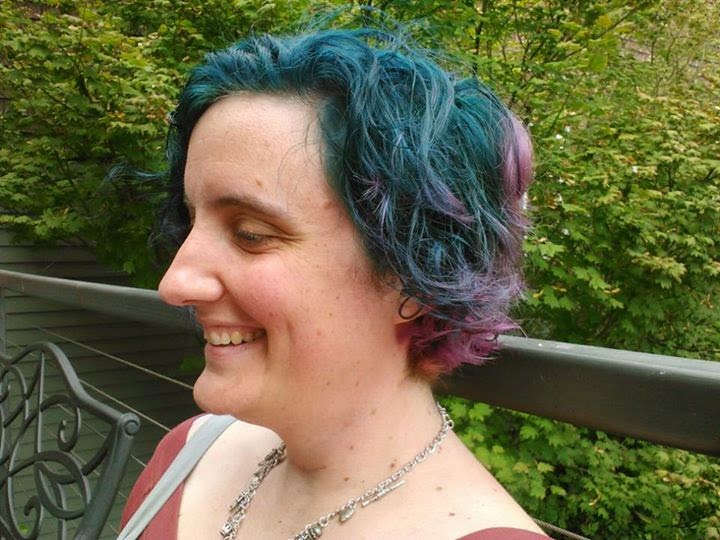 Joy DeLyria, 30, plays badminton on weekdays and takes her tea at four. She studied letters and then made them into words, and is now working on the paragraph thing. When not defying society by wearing breeches instead of the customary bustle, she supervises science, writes books, and loves her mother very much.  She also loves her father but it didn't sound as quaint, and she prefers to sound quaint whenever possible.


What do you think of Outdoor Trek so far, and what are you looking forward to about the upcoming production?
There are so many things I love about this production, but I'll stop at two.

First, I really enjoy making all of the elements of a production make sense thematically.  This is a trick Michael Bowers taught me--when you're tying to decide what phasers in Outdoor Trek look like, decide what message you want to convey, and act accordingly.  This seems simple, but it's very easy to be drawn toward what looks cool, or what I think might make more sense for the audience, or won't be jarring when compared to the original.  In this play, we thought a lot about what the mirror universe was, how it came to be, what these people were like.  That was what helped us make choices about costumes and set pieces.  It was an interesting challenge, and fun.

Secondly, I love the people involved.  Everybody is so smart and interesting, passionate about the production, willing to put in a helluva lot of work without monetary compensation, creative in problem-solving and contributing ideas.  While there are many things I love about Outdoor Trek, that is probably the number one thing I look forward to every year.  That and all the fame and fortune.  And Paul always gives me flowers, so that's cool.

What cool things do you do in your life outside of Outdoor Trek?
I wrote a book that got published once.  I write a lot of writings so maybe that will happen again someday.  I'm making a comic version of Hamlet with stick figures.  At work I do a variety of things, including handle boa constrictors, throw fireballs, freeze things with liquid nitrogen, paint planets, grow germs, write scripts, and develop trainings that include dragons.  I also made a spreadsheet about how you should watch Deep Space 9, if for some reason you're missing that in your life.

What history do you have with theatrical productions?
Wow.  No one's ever asked me that before.  When I was very young, Theater was that cool older dude who was only rarely available and somewhat expensive on dates.  I went all the way in highschool and college, if you know what I mean, but after that Theater just kind of dropped off my map.  I saw Theater occasionally and lusted from afar, but dates were just too expensive and difficult to schedule.

Theater, I don't know how to quit you.

What history do you have with Star Trek?
I grew up with Next Gen.  I didn't like it.  We called Worf "Peanutbutter Head" and hid behind the couch when he came on.  I was terrified that Geordi might take off his visor and I found Data's skin color repellent.  I didn't even remember Tasha Yar.  I did get super invested in that episode where the Enterprise kept blowing up, but who didn't.

In college my roommate would bribe me to watch Star Trek with her by ordering Domino's pizza.  We had Domino's every time we watched Star Trek when I was growing up.  When I hear the Next Gen theme song there is a Pavlovic response.  I liked pizza.  I still didn't care that much about Star Trek, though.

In 2009 a movie somewhat tangentially related to Star Trek came out.  It was called Star Trek.  I watched it and thought it was fun.  I also thought Kirk and Spock should hook up, and anyway it made me nostalgic for . . . you guessed it, Domino's pizza.  But then I started watching TOS and found love.  The End.

What excites you about the future of mankind?
Instead of saying something that I hope will happen in the future, I'm going to talk about now.  It excites me that we can so easily communicate across continents.  It excites me that voices are being heard that were once silenced; it excites me that gay marriage is legal in Washington, that we have an African American president, that Marvel announced Thor is going to be a woman.  It excites me that brains can be hacked to make prosthetic limbs more useful, and that Curiosity is on Mars, and that private spacecraft are going to ISS.  It excites me that there are stories, like many in the original series of Star Trek, that dream of warp speed and the idea that not only humans but all beings can work toward a goal of mutual respect and understanding.

The future of mankind excites me because despite all of the suffering and hardship, for many of us the present is the most magnificent time to be alive.  It can only get better from here.