Showing posts from 2010
Show all

Gearing up for the New Year

By Hello Earth - December 27, 2010
Happy Holidays! We hope everyone's had a wonderful holiday season and that next year is looking bright. Now that the inaugural year of Outdoor Trek is coming to an end, it's time to start looking forward. We will be back next summer, and given the response it should be bigger than ever. A lot of you have asked what you can do to help, and that's why I'm writing today. We want to put on the best show we can, and that needs a lot of people. So here are some things you can do: 1) TELL YOUR FRIENDS. This is the most important thing of all. Word of mouth is the best advertising, and what we really need is for you to check back here, to follow us at @hello_earth , and to make sure that when we have more details, they get to everyone who needs to hear them. 2) VOLUNTEER. Keep checking back here for audition notices and more specific information as we get closer. But we don't just need actors. We need people to help with publicity, with tech, with donations, and wit
2 comments
Read more

Thanks for our final weekend!

Thank you to everyone who made the first year of Hello Earth's Outdoor Trek a success: those who worked with us, who spread the word, and who came out and saw us. None of it would have been possible without each of you. The final performance was to a crowd of over two hundred, standing room only, and prompted this review at Seattle Geekly. We owe it all to our audiences and our cast. For those of you who missed it, or who didn't and want to relive the moment, we've collected some photos from crew and fans to share. Those of you who have noticed that the trailer has been taken down, fear not--we are working on something bigger and better. For those of you who want to know about next year, please stay tuned to this blog and our Twitter account (hello_earth). The response to this year's show pretty much ensures another, and we'll post periodically with our plans, progress, and requests for your involvement. Please continue to spread the word, to give us your su
1 comment
Read more 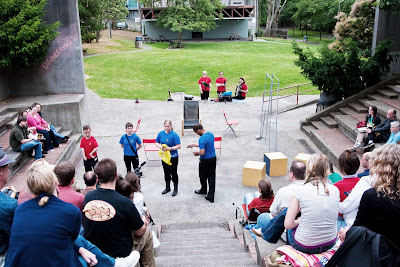 By Hello Earth - July 07, 2010
Hi, I'm Joy. I'm the director. That's pretty much all I've got to say about that. Now what you've all been promised--girls. Whenever I tell people Kirk, Spock, and Sulu are played by girls for Hello Earth's production of "The Naked Time" for Outdoor Trek, everyone asks why. (This is patently not true. Everyone says, "Cool!" Then they pause. Then they ask, "Will they be naked?") Kris (fellow producer, also acting Captain Kirk) and I went to the Vancouver Star Trek convention last week and some hot Orion girls asked us why--why we like the show, why we're doing this, what does it all mean ? We said we liked the diversity of Star Trek and wanted to celebrate it. "We keep hearing that," said one hot Orion girl. " Star Trek is so diverse, Star Trek is so equal rights, Star Trek is so utopian. But . . . then there's this." Then she showed me her legs. She's an Orion girl, you see, and
2 comments
Read more

By Hello Earth - July 05, 2010
Pacific Northwest Star Trek fans and assorted outdoor theater enthusiasts: It is worth the trip up/down/around to Portland to see Atomic Arts' production of "Space Seed" . Last year's "Amok Time" had a preview, and it's a toss-up which inspired us more. Not sure yet when we're headed down (it will be before July 31st, obviously), but there's plenty of time to see BOTH. Please come out and support them! Woodlawn Park Saturday/Sunday at 5 pm July 10-11, 17-18, 24-25, 31 and August 1st All ages - Free to the public
Post a Comment
Read more

I’ve been playing heroic archetypes since I was a girl of eight. My parents would sit on the steps leading downstairs, and the stage would be the hallway between the bathroom and the workroom. I was always Sherlock Holmes or the Doctor (the Fourth Doctor, of course, with the scarf) and I would make my brothers play Watson or K-9. I don't remember what they were about, if anything, but it occurs to me that twenty-some years later my interests haven't changed much. They have, of course, been refined somewhat. For example, I was not a fan of The Original Series or William Shatner as a young child, and somehow it escaped my notice that the Adam West Batman was clearly the superior version. Maybe I've gotten sillier, but maybe the more serious, younger me wouldn't have had the utter lack of sense that putting on a play from scratch in public requires. I’ve always loved acting, though I took some time off from doing it to study English literature and film and join a band
4 comments
Read more

By Hello Earth - June 11, 2010
Last summer, three friends watched Atomic Arts' performance of "Amok Time". Driving home from Portland--it was a whirlwind trip, prompted by the marriage of two great loves, Star Trek and outdoor theater--we said, "We could do that." We could, and we are. And here is the result. Hello Earth, a brand new nonprofit theater company, is bringing "The Naked Time" to Seattle's Dr. Blanche Lavizzo Park on July 31st, August 1st, 7th, and 8th . Our commitment is to free, outdoor theater which thinks Shakespeare is great but thinks other stuff is cool, too. Over the next few weeks, as we get our show together, Joy (director, producer) and Kris (producer, actor) will be introducing ourselves and offering behind-the-scenes updates on the process of bringing a beloved tv show to the stage. You can follow this blog and/or join us on twitter, @hello_earth . Star Trek is property of CBS/Paramount Television. No money is being made.
3 comments
Read more