Let's Talk About You

You are great! You came out in droves the first weekend to see "This Side of Paradise"- in spite of some seriously intense heat and sun on Sunday.

You told your friends! You wrote nice things about us on the internet!

It seems like everyone is so enthusiastic about our show. We've heard from just about everyone–

Wait, did Spock call in at all?

I suppose you can't hope to impress everybody.

See you at Dr. Blanche Lavizzo Park this weekend, Saturday at 7pm, Sunday at 2pm!
Posted by Julia at 12:51 PM No comments:

Also, check out our new pages (above post, below header) for show dates, times, and locations.

So this is the week before the show, which in theater-time is when everything actually starts coming together. Last night, we finally had all of our props for the show, and it was. . . very exciting.

Our show's aesthetic is sort of minimalist for both practical and artistic reasons. Practically speaking, lots of good-looking props cost money, and this is a free show. But the more artistic reason is that the production wants to focus on the human drama, and there's the concern that it's sometimes hard to focus on that when your eyes are being dazzled by special effects. We spent a lot of time exploring relationships between characters, hoping to incorporate the full weight of series history. These human experiences, and what they tell us about ourselves are paramount. (Incidentally, they are also Paramount™)

Also, there's nothing worse than a prop that looks like it's trying for realism and landed on ridiculous. I vividly remember a middle school production with a pie of poorly constructed papier mache, and the fact that it drew more laughs when it appeared than when it hit someone in the face. So instead of realism, we went for whimsy. But even so, having a physical object and a final vision reinforced that THIS IS TECH WEEK and WE ARE OPENING and just that immediacy is enough to make you excited and make your performance more "real." So from here on out, we just keep adding things.

Tomorrow: audience!
Posted by Julia at 9:53 PM No comments:

This is Your Captain Speaking!

Kris here, to bring you some delightful tidbits. Once again, Stevie Van Bronkhorst has created an amazing poster for us, to the delight no doubt of many windows and telephone poles around town. 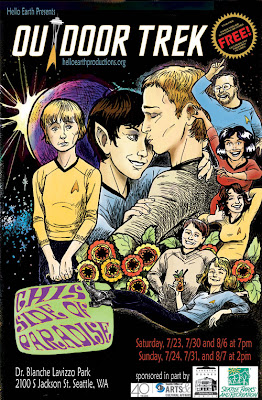 And as a further treat, Justin Robinson has put together a teaser from last year's show (filmed by Greg Brotherton), advertising this one. Please pass it around, if you want to make your non-Seattle friends envious.


Don't forget! We open in four days, and you want to beat the crowds.
Posted by Hello Earth at 9:45 PM No comments:

An Introduction to Berthold Rays

This week's guest post is courtesy of Mr. Spock

I was asked to share some manner of insight on the strange events that occurred on the planet Omicron Ceti Three. However, there is little factual information that I can provide on the topic. Instead I wish to share with you, denizens of the past, background information on the circumstances that led to the. . . shall I call it the Incident, about which you will hear more at Dr. Blanche Lavizzo Park just two weeks from now.

The precipitating event that led to the Enterprise making its fateful journey was the discovery of Berthold Rays in 2267. This variety of ionizing radiation was first observed on the outer ranges of Sector 63.

A mining party had been sent to explore potential excavation sites in the area. Twelve days after landing on an uninhabited planet, the captain radioed to let the company know that his crew had been waylaid what seemed to be a bout of severe flu. Then all communications were lost. Deeply concerned, a rescue party was immediately dispatched, and they found the ill-fated expedition vessel on the planet’s surface. Half of the crew had already succumbed; the other half were lethargic, suffering from numerous bruises, and red, blistering skin.

Recognizing the textbook signs of radiation poisoning, the rescue ship quickly transported the survivors to the nearest Starbase. There, the worst was confirmed, and the last of the survivors quickly succumbed to sepsis as a result of tissue degeneration.

Naturally, a full investigation was launched, which led to the discovery of a cosmic radiation that challenges many of our conceptions on the behavior of highly-energized particles.

Currently, Berthold rays are understood to be galactic cosmic rays. Their isotopic half lives are brief, suggesting that they are a relatively new phenomenon. The most current thinking posits that they stem from the recent pair-instability supernova in our galaxy, which is still under intense scientific scrutiny and debate. However, their deadly nature makes study of Berthold Rays frustrating.

My hope is that this brief overview of Berthold Rays aids in your understanding of the upcoming theatrical production, July 23-August 7, Saturdays at 7pm and Sundays at 2pm in Dr. Blanche Lavizzo Park.
Posted by Julia at 10:23 PM No comments:

Not a Girl, Not Yet a Doctor

Last week, I helped to do a press release for the upcoming shows. One of the things that I forgot to mention, which director Joy added, was that Star Trek in the Park is unique in that casting is done without regard to gender or physical appearance.

Some of this can be attributed to Gene Roddenberry's original vision: he believed in a future without racial or gender inequality, where the differences between people aren't even noticed, so it seems conceivable that traditionally "male" and "female" character traits would not necessarily correspond with a character's biological gender. But this presents a very interesting puzzle when thinking about how to portray such a character.

So I asked wondered, is the Dr. McCoy that I am playing male or female? On the one hand, perhaps, it should not matter- the character dwells in a world without gender norms. On the other hand, it is a fundamental piece of identity in current society, one that the audience will be either trying to determine or assuming. In the end, I made a choice, but I spent the majority of my focus on Dr. McCoy's medical training and American Southern heritage. Dr. McCoy remains plainspoken, something of a hedon, but kindly and affectionate and loyal. I hope that that remains most memorable, and if the audience chooses to wonder, I will be proud if I have achieved that level of ambiguity. It seems like something Gene would have gotten a kick out of.
Posted by Julia at 8:34 PM 1 comment:

A real American drink for the celebration of America's founding. NOT to be confused with the vastly inferior Kentucky variant.

Ideally served in a silver julep tumbler, although a glass is acceptable. Fill tumbler with crushed ice. Pour in brandy and peach brandy. Stir in dissolved sugar. Stir for 2-3 minutes vigorously. Garnish with mint sprigs, tucked into the ice, not crushed or smashed. Serves 1.
Posted by Julia at 1:25 PM 4 comments:

This Is Not Your Captain Speaking

Greetings! My name is Julia, and I play Dr. Leonard "Bones" McCoy in this year's Seattle Outdoor Star Trek.

Hello Earth productions' cast and crew have been hard at work on "This Side of Paradise", the classic Star Trek episode scheduled for July 23 and 24, 30 and 31, and August 6 and 7 in Dr. Blanche Lavizzo Park in the Capitol Hill neighborhood. See the park on a map here.

Over the next three weeks, I will be sharing some of the triumphs and trials of the rehearsal process.

Delving into episodes from Roddenberry's original series is an exciting challenge for an actor, because there are some interesting thematic statements and ambiguities, a rich character background, and an entire universe unlike our own to consider. At the same time, when a series has a passionate following, there's a pressure to get the details right and you need a clear, well-thought-out vision to justify your interpretation. And it's a world that I had very little familiarity with before this summer. It's like performing Shakespeare for a group of Elizabethan-focused English Doctorates. And you're a native Russian speaker.

Fortunately, Hello Earth productions is nothing if not thorough. In addition to my outside perspective, we have, through a very dedicated dramaturg, obtained a few transmissions from the future, reflecting the actual perspectives of the crew of the Starship Enterprise regarding the incident on Omicron Ceti Three that formed the basis for the episode. These guest blogs will be clearly marked, and will hopefully provide background information to enhance your understanding and enjoyment of the show. It has certainly helped me enormously!

Newer Posts Older Posts Home
Subscribe to: Posts (Atom)
As always, every Hello Earth presentation is free to the public, though donations are accepted!